There was a brief discussion on twitter about the demographics of members of the National Academy of Sciences. The NAS itself (or at least some intern) chimed in to note that the academy does not keep track of race/ethnic identification. As such they have no idea what those numbers are. This struck me as odd, since it’s pretty easy to throw a basic demographic survey at new members. At least then you’d have some data. We are scientists after all. That’s what we do.

So I did it for them (Method details below)

Out of 759 members in the last 10 years there appears to be 6 African Americans. That clocks in at 0.7% which is less than 1 per year. Here’s what that looks like: 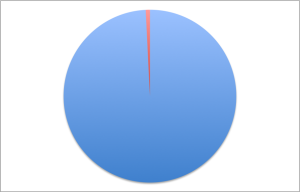 This data point actually fits in well with the trend of increasing homogeneity in science/academia as you go “up”.

Some Input for NIH

Where is the networking sleaze-line?